7 ways to get more traffic, followers and likes using the Lord Buckethead technique

Today I want to talk about how to get your business noticed in a noisy internet full of distractions.

I also want to talk about Lord Buckethead…

The 7 clever things Lord Buckethead did in the election that you can use to get more followers, more shares, more likes and more traffic.

If you’re reading this from the USA, Australia, South Africa or elsewhere, I’ll quickly fill you in.

We had a general election recently and Lord Buckethand competed against the Prime Minister Theresa May in Maidenhead.

A British comedy candidate in the tradition of Screaming Lord Sutch, he stood against Margaret Thatcher in an election in 1987, then John Major in 1992.

Of course, that was long before social media.

He was profiled in The Telegraph, Guardian, Daily Mirror, the BBC, The Sun and countless blogs.

He was even getting coverage from late night American talk shows such as John Oliver’s show, where he was watched by millions.

Here is his Twitter account with over 80,000 followers, mostly picked up in the days before and after the election… 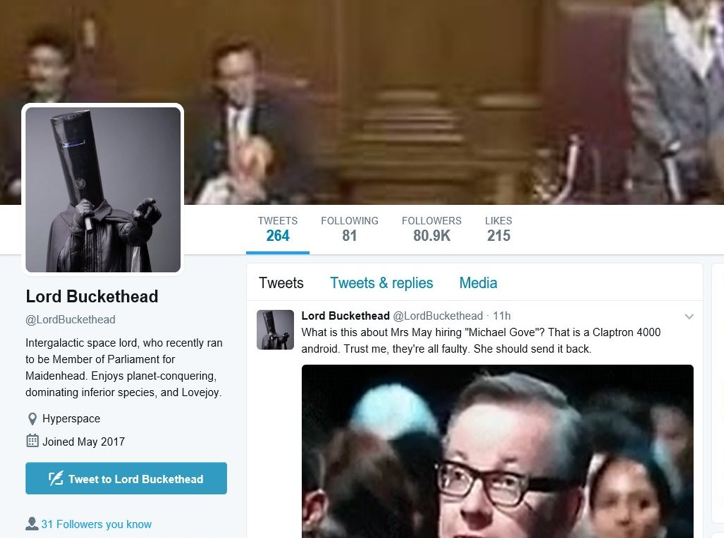 In other words, Lord Buckethead is now famous, far beyond the confines of Maidenhead or a few funny articles in the tabloids.

You could say, SO WHAT?

Well yes. But Lord Buckethead was also trying to make a point.

His candidacy was satire and a commentary on the electoral process and it offered (amongst the silliness) a political message about education and housing.

There are always joke candidates – but they rarely go global like this.

Buckethead’s amazing publicity success was down to the fact that he followed a few solid communication principles.

So here they are, 7 lessons from Lord Buckethead

You only have to look at that Maidenhead election stage line-up to see that Lord Buckethead stood out.

What was funny about is campaign was the ludicrous contrast of him standing alongside serious politicians.

While you shouldn’t necessarily play for laughs, it’s important that your business is striking, different and distinctive. That goes for every element, from your website to your social media posts and newsletters.

Whatever your business niche, your target customers are faced with a lot of blogs, email newsletters, social media accounts, videos and articles…

Not to mention all the advertising messages they see form your rivals, plus the noise of real life – phone calls, text messages, radio and TV shows.

In all this noise and clutter, what will make you stand out?

It’s likely there are certain tropes, styles, assumptions and attitudes that prevail in your industry or area of interest.

So try and find a striking design that’s different to what people might expect. Contrast yourself with your rivals. Use humour if your competition is usually serious, or show passion when your competition tends to be stuffy or dry.

Take a different angle on events. Write in a unique voice so that you sound distinct from the other voices vying for attention.

Be larger than life!

Lord Buckethead had a manifesto. 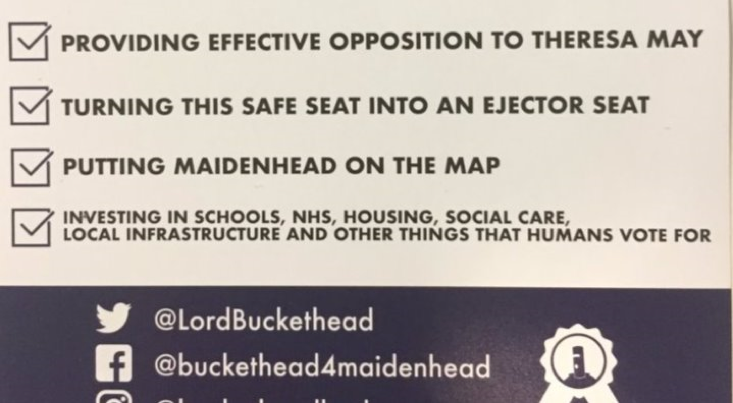 Get across your mission to target audience in a clear and compelling way. Whether it’s to deliver the greatest pizza in the world to your town, to put an end to yo-yo dieting, or help the environment with your recycled furniture.

Identify your strong beliefs, goals and opinions. Get them onto a page on your site so that they’re easily shared.

Even better, turn them into an ebook or white paper and share it through social media, your email newsletter and your blog. It should be free for anyone to download, but make sure your business’s website and social media links are on there for everyone to see.

3. Be active on social media

It’s harder to get famous on social media if you’re not on social media. Make sure you’re on Facebook, Twitter, Instagram, LinkedIn or the best combination of networks where your best prospects hang out.

Lord Buckethead used Twitter, Instagram and Facebook to spread his message. He really stepped up his social media activity on the months running up to the election day.

Try to get your social media links onto all your publications and communications, then stay active on those platforms to build an audience.

Lord Buckethead created a YouTube music video to help spread his message using a David Bowie song. It got 118,000 views. Not bad for a comedy candidate in Berkshire.

Is there a film you could make? It could be a talking-head style video if you are confident enough, a demonstration of a product or an animation. If you’d like to create it on a budget try commissioning something on www.fiverr.com.

Lord Buckethead was funny, silly and always in character.

Similarly, you should think of you (or your business) as a character and make sure you express it all your communications. Identify your quirks, personality traits and world outlook, then get that across.

As long as it matches the tone of your business and is likely to chime with your readers, it’s OK to be humorous, cynical, idealistic or grumpy.

Your business should have a good origin story that explains who you are and why you are online. Look at Lord Buckethead’s: https://www.buckethead4maidenhead.com/about/ 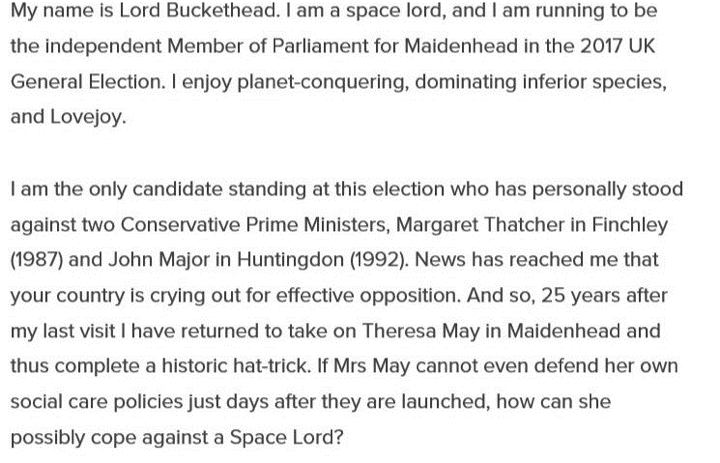 Make sure you have a strong clear backstory on your About Me page. It should be simple, waffle-free, with a clear reason behind the creation of your business, products and services.

Lord Buckethead was up against Theresa May. What about your business?

Is there a common enemy that you and your customers have?

Taking a stand against an enemy will gather people around your cause.

It you can get these 7 elements into your online content, you should notice…

• More traffic to your website from people following you on social media, checking out your site and sharing your posts.

• Increased awareness of you, your website and products, thanks to the exposure you get. This could mean more searches for you on Google, bringing you more traffic.

• More interviews, reviews, comments and press coverage about you and your business.

Try them out and see how you get on!